A change in Boston’s default speed limit and increases in parking meter rates should improve commuting conditions for pedestrians, bikers, and drivers who need parking.

On January 9th, the default speed limit drops to 25 mph from 30mph. This change should have a meaningful impact on pedestrian and biker safety. Based on WalkBoston, pedestrians have a 40% chance of getting killed when hit by a vehicle driving at 30 mph. That probability decreases to under 10% at 20mph. The Transportation Department will also be looking at areas due for a 10mph drop to 20mph.

Boston’s goal is to achieve zero fatalities on its city streets from traffic crashes. This initiative, only first announced by Boston Mayor Walsh in 2015, will be modeled off a program born in Sweden in the late 90s known as  Vision Zero. In 2016 the number of fatalities due to traffic crashes, including pedestrians, bikers and drivers, is at the same level as it was in 2014 (at about 17 according to a Boston Globe article). Slowing down cars and improving biking and walking pedestrian infrastructure should help.

In addition to slowing down cars, Boston is hoping to reduce traffic associated with finding parking in the Back Bay and Seaport areas through two approaches.

On-street parking in the Back Bay will increase from $1.25 per hour to $3.75 per hour. The idea with this increase is to discourage day-long meter feeding and to encourage day-time Back Bay workers to use garages. By freeing on-street parking, drivers visiting the city for a short visit will have an easier time finding parking. With day-long garage parking exceeding $40 at most garages, it will be interesting to see if the meter increases will be sufficient to change behavior.

The pilot in the Seaport will be more sophisticated through the use of sensors which will allow the city to adjust rates based on true demand. Pricing changes won’t happen automatically as with Uber surge pricing, but will adjust every two months, in increments of 50 cents. Hourly pricing will range from $1 to $4 and will stabilize at a rate that achieves one free spot per block at all times, the ideal scenario in parking management.

Exciting developments indeed! I hope the next phase will include an app that helps drivers quickly locate open spots (as per my earlier post on the topic). 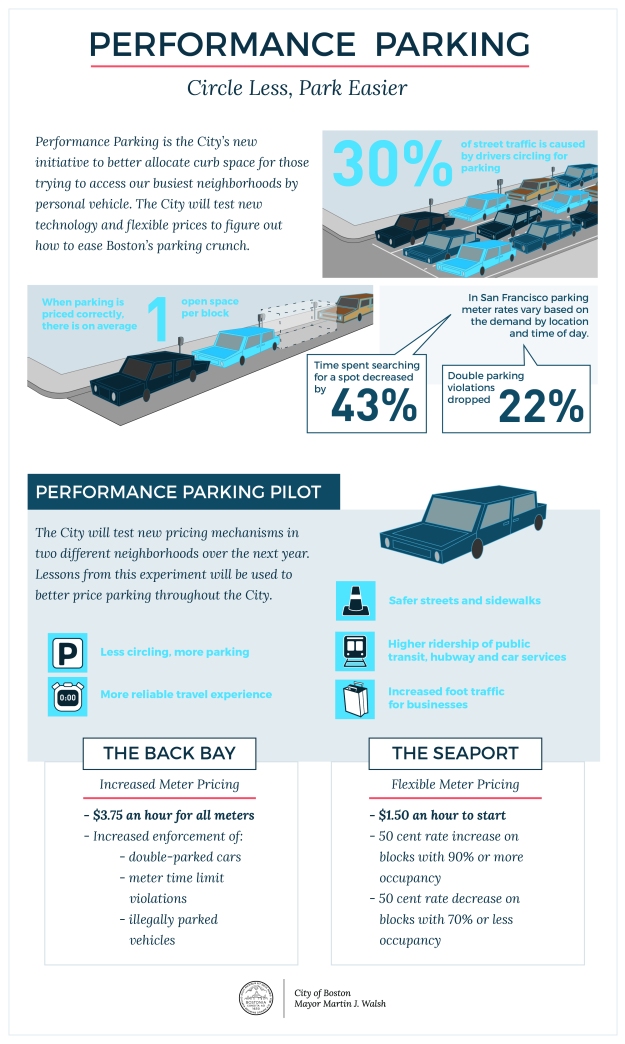