We’re all hooked on navigation apps and can’t remember what life was like without‘em. For the direction challenged, apps that give you turn-by-turn instructions are saviors. Their up-to-date travel time estimates increase the predictability of commutes.  Without a doubt, these apps reduce commuting stress and bring happier commutes. But, while their benefits are significant, they have also made driving easier.

The decision to drive usually makes sense when minimizing commute time is the key goal. But, if your goal is to maximize enjoyment during the trip (whatever that means for you), or minimize travel costs, the fastest option may not be the answer. Maybe you can allot 30 minutes to a trip, so getting there in 15 minutes is not necessarily ideal. Future navigation apps should be able to help commuters optimize their route based on multiple goals, not just travel time.

END_OF_DOCUMENT_TOKEN_TO_BE_REPLACED

This issue of access to reliable transportation is being addressed through Go Boston 2030, Boston’s first transportation plan in 50 years. Access is one of three key goals for Go Boston 2030 (the other two are safety and reliability). The city’s goal for access is for every household to be “within a 10-minute walk of a rail station or key bus route, Hubway station [Boston’s bike sharing system], and car-share.” As a side note, it is interesting that car-sharing is considered an alternative to public transportation when a key goal for Boston 2030 is to reduce single-driver commutes by half in 2030 (from 40% of commutes to 20% of commutes). However, I do admire the Boston Transportation Department for putting out a very measurable goal that will give Boston households an alternative to owning a car.

Access to public transit is not equal across Boston neighborhoods, so I learned last week during Go Boston’s 2030 scenario workshops. Not surprisingly, lower-income neighborhoods and neighborhoods with a high representation of non-white households tend to have poor public transit service; buses and commuter rails are too far to walk to and they are less reliable than public transit in more affluent neighborhoods. And walking often feels unsafe due to speeding drivers. As a result, individuals in these neighborhoods are more likely to be car dependent. Under 15% of Bostonians live in car dependent places, but this rises to over 30% for those in the lower income bracket (see Go Boston 2030’s Vision report).

April 1st is my son’s birthday. Unfortunately, making funny jokes is not in his skill set yet, in spite of his best efforts. He got that unfunny gene from his mom. So this post is not another April Fool’s day hoax but one about the fooleries invented by the alternative transport industry. The most popular ones are those in the grey zone; the ones that don’t seem so foolish. Shareable tandem bicycles and electric scooters – why not? As fads and fashions change rapidly so too might preferred modes of transit.There were many AFDJ (April Fool’s Day Jokes) by bike sharing organizations so I restrained myself to mention only those from cities that I have personal ties to.

London: Santander Cycles received hundreds of likes and retweets for its announcement of Santandems (#Santandems): a tandem bike for two.

Many commentators thought this concept should live beyond April’s Fool day. Responses from Santander Cycles were a bit uninspiring however. 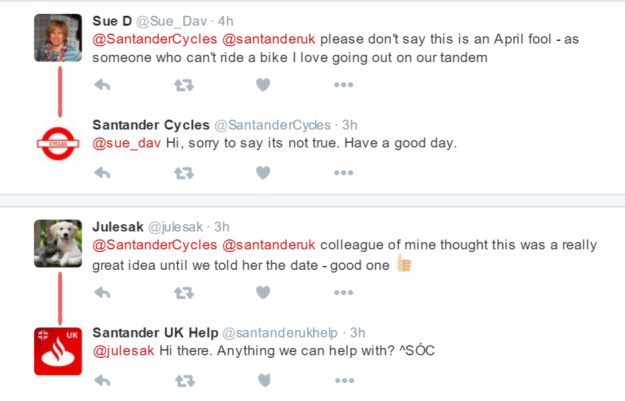