I ran a survey through Facebook ads to take a pulse of Boston-area commuter happiness. As of now, I have 25 responses: not a sufficient sample size for a scientific study of the topic, but enough to start writing about on this blog. The survey will remain open for those in the Boston-area who still want to contribute. Not surprisingly, about half of my survey participants are unhappy with their commutes.

Most of them take some form of public transportation. I had no bikers, one walker and four drivers, so a pretty transit-reliant population. About one-third (or 8 out of 25) consider themselves to be mixed mode commuters and combine public transportation with walking or driving. 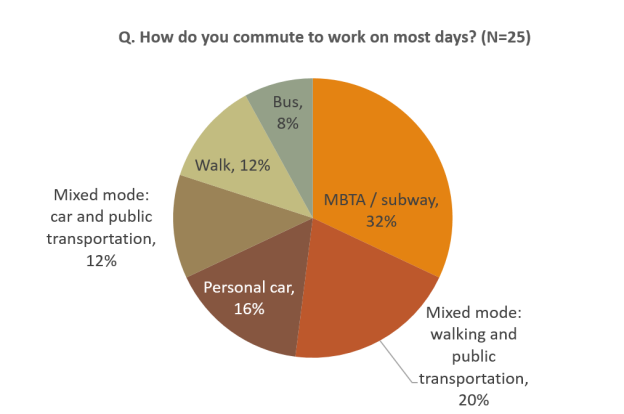 This finding by itself indicates a gap in a lot of commuter research that tends to look a single-mode commutes. Looking a mixed mode can be important, particularly when looking at happiness. My very preliminary survey results show that commuters who drive and take public transportation are happier with their commutes than individuals who drive all the way. I would need a much larger sample to test out this hypothesis of course.

When asked what would make their commutes better, over half want a shorter or faster commute. Again, not too surprising here. What was more interesting were the #2 and #3 most frequently cited areas for improvement:

A big cause of commuter unhappiness is lack of control. Getting to work later than expected hardly ever generates positive feelings. Just thinking about the possibility of being late because you’ve had a few bad past experiences creates stress.

Bikers, walkers, kick scooter riders benefit from having more control over their commutes. As a kick scooter rider, I certainly feel more in control: I can kick scooter all the way to my destination or I can mix it up by taking the T for a portion of the ride and scootering the rest of the way. If the T or bus is delayed, I can get a head start on my trip with the scooter.

Commute control is probably the most important reason why people opt to bike to get to work. It’s not as much about exercise and fresh air; only 2 out of my 25 survey respondents say they want to add more activity to their commutes. Exercise and commuting don’t seem to mix too well in people’s minds. People look at their commutes as a means to get somewhere quickly and not as a means for exercise or fun. In all fairness to my participants, while none of them biked, most do take publication transportation which is a more active form of commuting than driving. So, they may already be getting their fill of activity. I certainly understand the aversion to getting to work covered in sweat.

The other area for improvement is adding more commuting options. Commuting is something that happens every day. Doing anything the same exact way everyday gets boring. Everyone should be challenged to find a different way to commute. For example, if you live in the Brookline/Allston/Brighton-area, try using the new urban mass transit bus, Bridj. The new transportation service charges less than $5 for a comfortable bus ride to key business centers: Back Bay, Financial District, Seaport, and Kendall Square. You still need to walk to and from the Bridj stop, so bring a kick scooter along.

What do you think of these results so far?